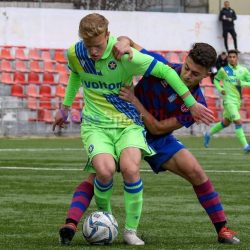 Of the 6 footballers we included in our big tribute to the talents of Asteras, Gousetis is the oldest and the only one born in 2002. The 19-year-old (27/08) right back comes from Zakynthos where he spent all of his life and footballing career, before being spotted by Asteras. At the age of 6 he started playing football in Apollon Zakynthou, followed by the academies Doxa Pigadakion and A.O. Tsilivi. Asteras Tripolis distinguished his case in the usual way, through mixed EPS matches. So at the age of 16 he went down to Tripoli and joined the youth infrastructure of the team, starting in the U-17 team in 2018/19 season. At that time he was playing as a winger and kickstarted the campaign by playing a full season (he was absent from only one game) with strong statistics, 6 goals and 4 assists. For the last 3 years he has been playing steadily in U-19, with 23 appearances the year before last (2019/20), with the number of participations last year and this year (13 and 9 appearances respectively), but in the meantime he has moved further back on the field, to the position of right back.

His coaches realized that the best use of his offensive assets combined with his usefulness in the defence, would be to turn him into a modern day fullback who will play on the whole length of the field, doing overlaps and creating overload with the winger, putting the opponent’s defence on the ropes and constantly creating cracks from the right. This is exactly what we saw in Gousetis and we were interested. The Zakynthian multi-tool has a very good cross with both feet, great adaptability in terms of the tactical part and the role he will be asked to serve on the field, and he is quite aggressive choosing an intrusive, pressing, tough approach to his game. In addition, he is altruistic and all his movements on the field are based on teamwork, he never shows selfishness. 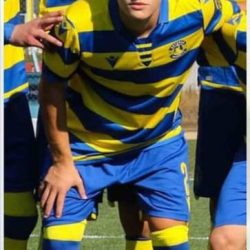 Are you interested in this player? Send your message via Greek Scouter.